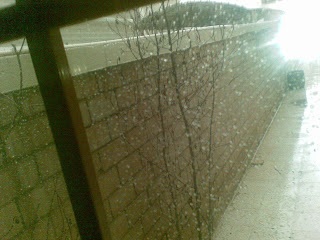 Did winter realize its been neglecting us and decided to make up for it?

I woke up to a sound of banging.

My room was pitch black.

I got out of bed and looked out my window.

The sun slept in. Its a no show today.

And winter sent its furious children.

Rain and wind. There in a fight with the dust outside, and theres no telling whos winning.

But winter forgot its most important daughter. The only one i enjoy spending some time with, the COLD.

Its so stuffy outside!

rain rain go away and don't show ur face any other day wayed a7san!

I cant keep my car clean and its pissing me off!

so I'm not the only one who woke up on the winds banging !

i love rain. and its not rain unless its raining hard three days straight.
i'm off to the avenues to shop for work. come.

This is April showers :D
I think this is gonna be the trend now! No real winter in December or January and not much rain and then few days of rain in April!

Rain is a bless.. But for me I really don’t like it.. it ruins my hair..
The weather is amazing today in Amman :)

bint shomar
its raining dust
u really shouldnt love it

Rula A
i LOVE amman weather!

i woke up 3ala the sound of rain too .. bs i didnt realize what was going on outside! i thought it was only a typical sarrayah..

I neglected the whole post, you drive ? men mtaaaaa?

JE
laa it was quiet a sight!

It's only sarayat season.

his
and thats why its my least fav. season!

I do love rain especially in Montreal & London =) even though I can't spend the day out, still I like to be flushed!

Regarding Winter in Kuwait.... Which winter?!!! ;Pp

when I woke up to the banging as well it wasn't pitch black - it was dark red!!! I looked at the sea and the sea water had a very weird color as well!!!

i cant say im a real lover of the rain. Rain is a blessing indeed, but I hate to be under it & get wet. So when i'm in the shade & "dry"; i like watching it fall. & what i totally love about it; is the smell it produces when its mixed with dust; oh, my how am i in love with this particular smell!
& when I dont have to go out; i dont have a problem with it.

So in general, i'd say i dont like the rain, but i can't deny the joy i get when i see it fall when its not soaking me wet & im totally dry. so there ya go.

but eshda3wa, were u going out this morning??? where were you going???

Anyways, i documented my experience on my blog; everyone is invited to check it out & share your thoughts ;)

i love driving in the rain ;p

The concept of weather is purely amazing...

Everyone is always trying to get better at 'predicting' the weather...

It's like everyone has already made up their minds that one could never truly know the weather.

What's more interesting, is that the weather is a cycle... :P
And in engineering, to start and end a cycle, there has to be an external factor... something outside the cycle that gives it a start... an end!

And it seriously makes me wonder sometimes... what that certain external factor could've been =)

ali m
it was really weird

jab
i was going to my aunts for breakfast, then to the saloon!
will be checking ur experience soon

the man
i dont

sara and alia
thanks!

raven
it is amazing
sub7an allah

Rain always ruins my hair, i guess that would be an enough reason for me not to like it.

I happen to wash my car 10 minutes before it rains! Literally. I've been unfortunate like this every time I decided to wash my car. 9arat feni like 4 times. I would know that there is a possibility for the weather to be rainy but I can't stand looking at my car so damn dirty trab and mud and black rims from the earlier rainy days. Oh well... I,too, like the smell of rain mixed with earth. It ruins my hair but it gives me nice chills too. Takes me to a world of mine ;)

I'm just wondering, how could you be some kind of Dr. (dentist, I think?) and have just recently started driving? Don't drs study for 5 madri 7 yrs to become one? Are you an 18 yr old genius?

Journalista
LOL
i wish i was an 18 yr old genius.
i just chose not to drive until i turned 24 :)